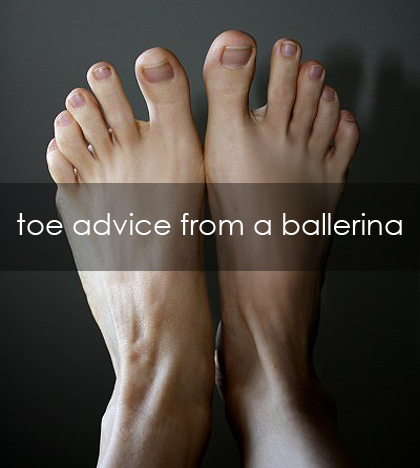 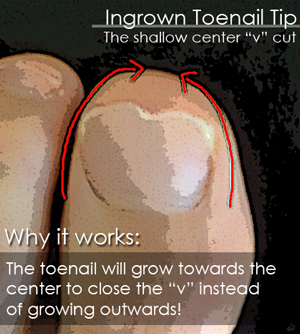 As if dancing on my toes wasn’t painful enough, I suffered from ingrown toenails for years. It got to the point that I didn’t even know what a healthy toenail was supposed to look like. I saw a podiatrist who said that I should have surgery to remove part of the ingrown toenail. The recovery time would take two to three months before I would be able to dance again. I didn’t want to miss out on dancing for that long so I suffered through dancing on four ingrown toenails.

One of my colleagues told me about an old wives’ tale to get rid of ingrown toenails. I was so desperate to try anything that I gave it a try. It worked! Not only did they go away, they have never come back!

According to the old wives’ tale, you cut a V-shape into the center of the toenail. The nail gravitates toward the weakest part of the nail, so if the sides are weak, the nail will grow toward the side resulting in ingrown toenails. By cutting the V in the center of the nail, it starts growing toward the V to close the gap. The nail starts growing in rather than out. This is such a simple yet effective cure and I’ve been cutting a V into my toenails ever since.

For those of you who do not have ingrown toenails, I’ll tell you how to prevent them. Cut your toe nails straight across, then use a nail file to smooth the sharp ends of the nail. Stop somewhere around the tip of the toe before it becomes too short to prevent sensitivity. If you keep your nails square, you will be able to avoid ingrown toenails.

I am not a podiatrist, but I hope this simple trick helps you either get rid of ingrown toenails or prevent them from ever happening. Happy dancing!