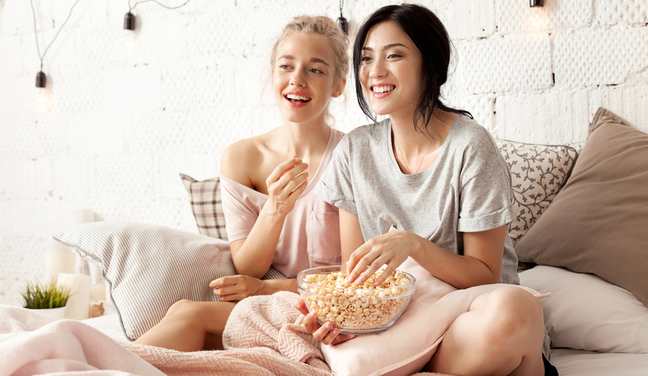 10 Timeless Dance Movies That Every Dancer Should Watch

It’s hard to believe that Center Stage came out in 2000, almost 20 years ago. The movie follows a group of young ballet students at the fictitious American Ballet Academy (loosely based on the School of American Ballet) as they chase their dreams to become professional dancers. The star-studded cast features Ethan Stiefel, Julie Kent, and Sascha Radetsky as well as superb choreography by Susan Stroman. The soapy, sometimes racy plot is no doubt melodramatic, and yet it holds a certain charm and a special place in my heart.

Ahhh, is there any movie more classic than West Side Story? This brilliant musical film restages the love story of Romeo and Juliet against a backdrop of gang warfare in 1950’s New York. There’s a little something for everyone– from Jerome Robbins’ brilliant choreography to a dashing young Richard Beymer as Tony, the modern day Romeo. A new adaptation of the beloved Broadway and film is set to come out in 2020, and will be directed by Steven Spielberg and choreographed by none other than Justin Peck. While no official trailer has been released yet, the hype is real. I for one cannot wait.

Step Up is perhaps one of the most watched movies from my youth. The final dance scene was the coolest thing 13 year old me had ever seen. In the movie, sparks fly between Tyler (played by my childhood crush Channing Tatum), a troubled yet skilled hip hop dancer, and Nora (played by Jenna Dewan), a gifted ballet student. The couple fell in love both on and off screen, although they sadly divorced last year to the dismay of fans everywhere. Step Up launched an entire franchise, resulting in four sequels (only a few of which are actually worth watching), a spin off film, and a television series.

This 1987 classic follows Frances “Baby” Houseman as she falls in love with her dance instructor, played by none other than Patrick Swayze *swoon* at a summer holiday resort. It also features the brilliant Kenny Ortega’s choreography throughout. I somehow managed to make it into adulthood before ever watching this one, and I’m ashamed it took me so long. If you’ve ever wondered where the phrase “Nobody puts baby in the corner” came from, then look no further. Dirty Dancing has secured itself a place in not just the dance film canon, but pop culture as a whole.

Ahhhh, Save the Last Dance–so bad and yet so good. Despite being somewhat cheesy, this movie respectfully addresses some touchy subjects including racial politics, masculinity, and parenthood. Julia Stiles plays Sara, a high school student who abandons her dream of becoming a ballet dancer after the sudden death of her mother. She moves to inner city Chicago where she befriends a young black man who she eventually falls for.

Came for the star appeal of Mikhail Barysnikov and Gregory Hines, stayed for the 80’s dance drama. My mother passed on her obsession with this movie to me, and I’m so glad she did. While this movie may have never been Oscar-worthy, it’s undoubtedly an excellent way to spend two hours of your life. The story is centered around Barysnikov’s character, a Russian defector, and Hine’s character, an exiled American. Epic dance scenes ensue, including a tap vs. ballet dance-off and Barysnikov effortlessly whipping out 11 pirouettes that is pure cinema gold.

Billy Elliot tells the story of a young boy from a northern England mining town who chases his dream of becoming a professional ballet dancer. This film confronts negative stereotypes of male dancers, and does so with a whole lot of heart. Not to mention, the movie is loosely based on the true story of Philip Mosley, a former dancer and current character artist with the Royal Ballet. I’m hopeful that the movie inspires future generations of boys to unabashedly pursue dance as a career.

This 2006 dance drama is based on the true story of Pierre Dulane, founder of Dancing Classrooms, a nonprofit that brings ballroom dance to NYC public schools, and tells a heartening tale of Antonio Banderas’s character whipping a class of misfits into shape through dance. While the students are more than skeptical at first, eventually he wins them over with an enticing tango demonstration. Disclaimer: this movie made my mom cry, so if you’re prone to getting emotional watch it with a box of tissues.

Any movie that features a cameo by the one and only Missy Elliot is automatically great in my book. While one can certainly argue that Honey is cheesy and formulaic, the dance scenes more than make up for it–it’s so bad it’s good. Jessica Alba stars as Honey, a young hip hop teacher who dreams of choreographing music videos. The movies also features performances by Tweet, Jadakiss, and Ginuwine. Need I say more?

Burlesque follows Ali, a small town singer who moves to Los Angeles and begins working at a neo-burlesque club as a waitress. She befriends one of the dancers who takes her under her wing and helps her fall in love with the art of burlesque. Delightfully over the top and extra, this movie is pure fun. Plus it has Cher and Christina Augilera in it, and that’s all that really needs to be said.

None of these dance films may have a 100% rating on Rotten Tomatoes, but they are no less entertaining and are sure to inspire future generations of dancers to come. Which dance movies are in your top ten? Did we miss any that you feel should have been included? Sound off in the comments and let us know!

6 Reasons Why Dancers Should Work with A Licensed Nutrition Expert