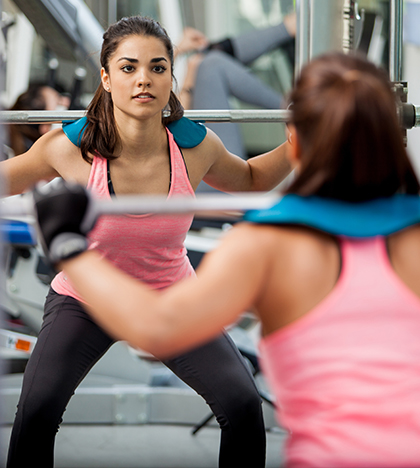 When I’m in the off-season, I’m always trying to think of creative ways to stay in shape. I think it’s good to take off some time completely from ballet class, just to give your mind and body a break. Sometimes you just need to not think about a plié, you know? During this time, I like to workout at the gym and do exercises that mimic the same muscles that I would normally be using every day in ballet class. When I’m doing arabesques all day, I don’t feel the need to go to the gym and do squats. However, these types of exercises are great to integrate into your workout routine in order to keep your ballet muscles engaged even if you’re not taking class. Here’s a quick circuit that I did that targets the glutes and abs. I love these types of workouts because you really feel them, as they are pretty intense. I don’t normally do workouts like this during the season because I focus on more low-impact exercises during that time. Also, I don’t like being too sore for rehearsal. I completed this after doing a 1 mile jog outside, but you can easily do another warm-up!

Alexandra Pullen was born in Nashville, Tennessee, and was raised in Chicago, Illinois, where she began her initial ballet training at a local community center. Pullen studied at Dance Center Evanston, Evanston School of Ballet, and Chicago Ballet Arts, and the Ruth Page School of Dance, where she joined their company, the Civic Ballet of Chicago.

She trained on scholarship at the Joffrey Academy of Ballet in Chicago under Anna Reznik and Alexei Kremnev. She toured with the Joffrey Trainees to perform as Clara in The Nutcracker Suite. She studied on scholarship at summer programs of the San Francisco Ballet School, School of American Ballet, Pacific Northwest Ballet, and American Ballet Theatre.

In 2012, Pullen competed in the Youth America Grand Prix Chicago Semi-Finals and received a gold medal in the classical category and a silver medal in the contemporary category. She was a Finalist in New York City. In September 2012, Pullen was awarded the Shoot for Change Scholarship to attend the Jacqueline Kennedy Onassis School at American Ballet Theatre, and joined ABT Studio Company two weeks later. Pullen joined ABT as an apprentice 2013 and was promoted to the corps de ballet in 2014. With ABT, Pullen's rep included Don Quixote, The Nutcracker, Giselle, Swan Lake, Coppelia, Ashton's The Dream, Manon, Cinderella, Gaite Parisienne, Les Sylphide, La Bayadere, and Twyla Tharp's Bach Partita. She toured ABT to destinations such as Abu Dhabi, Australia, Washington, D.C., and Minneapolis. This is her second season with Colorado Ballet.

My Life On the Road: Chapter 4

A Reminder That You Are Enough